Had the pleasure of making some panels for VoS' Synth voice module and wanted to share.

Info about the module can be found here: http://voiceofsaturn.blogspot.com/2012/ ... odule.html 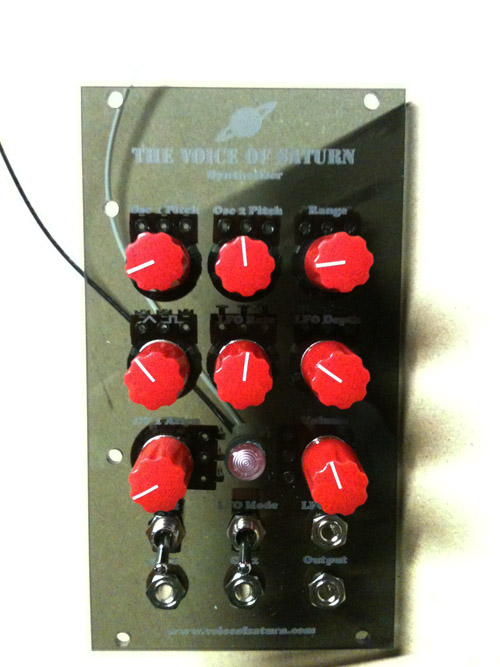 Looks sweet brother. If your case ever gets too full, and you need a place to store all your extra awesomeness let me know.

I am kinda sad to be the noob to ask this, but does it track 1v/oct?
If i got that right, this module is two oscs and one lfo. trve?

It doesn't track 1v/oct its definitely meant for more chaotic noise / drone sort of stuff and at its heart, is essentially an atari punk console on steroids. With the attenuator you can scale the tracking a bit and get some fun little sequences out of the thing for sure. I'll be doing a new demo later this weekend which should show this better.

great panel, great module, thanks travis!
"You can't rule the world by going at it all scattershot." - Pearl Forrester, "The Final Sacrifice"
Top

Vactrols are the electronic equivalent of being drunk. -decaying.sine
Top

Thanks Vav, nice to hear that the sequencer worked out for you!
Top

That sure would look/sound nice next to the Trogotronics in my case!

Love this thing and you are right Causticlogic it would go really well with some Trogotronic modules!
"I have come here to Kick Ass and chew bubblegum.....and I'm all out of bubblegum"

"And since - my friend we have exposed your deepest fear! I sentence you to be exposed before all your peers! Tear Down the Wall!"
Top

Looks great! I already have the original VoS synth - looks like I may need to get another one. Any updates on the Mark II yet?
Top

Post deleted. My question was already answered in the link above...

Hopefully I'll get a video up this week sometime of another demo. In using it recently for some recording stuff I realized that this thing actually works pretty well as a sort of waveshaper - you feed the cv input a saw or square wave and it resets the circuit, kind of a hard sync. Playing with it this way I got some pretty killer harmonics.

As for the VoS MKII, I hope to get back to working on that in the near future but my work/travel schedule is pretty bonkers for the next few months and now i'm thinking of doing something thats more digital based...
Top
Post Reply
16 posts • Page 1 of 1