Well, i built it, but made a few mistakes.

First i bought silver solder which i have since discovered is probably the wrong stuff :( bought a big roll too. The soldering was hard but im very inexperienced so thought it was that. Doh. Ã‚Â£18 i spent as well, got a big roll. Stupid should have checked first :( I thought something was wrong as it only metled at a very high temperature. I just assumed silver = better conductor = better solder.

Will this damage my soldering iron? Its a variable temperatuer one, thought id splash out . http://www.maplin.co.uk/Module.aspx?ModuleNo=10271 Can always buy a new tip i guess.

I also completely messed up one switch, works but badly attached, maplins didnt have a solder pump. Can prob rectify. And also got two capacitors the wrong way round, noticed in time, but had to desolder one, nightmare, presumably due to this silver solder. Not sure how, i double checked everythign (or so i thought), not a dig at the kit or instructions, they were very clear and even made a big point of making sure the capacitors were right.

But got it together in the end, one capacitor is still stood on long legs (

) again will fix when i get the solder pump.

But im not sure its working correctly... its working, but making all manner of weird and wonderful noises. sounds ok, but nothing like the mp3 demos.

Feel a bit deflated, wasting the money on the wrong stuff mainly. Ive also ordered a much more complex kit, which worries me a bit now. This was supposed to be a good starting project.

The kit itself was great, really helpful and clear documentation, and great tips like the one about getting the pots etc in by doing one quick joint, then remelting. Again, i think this was much harder with the wrong solder. Doh. :(

If anyone can clarify about the silver solder and any more useful comments that owuld be appreciated.

Oh and i seriously need a desk - built it on top of the washing machine in the garage, have a baby in the house so cant solder indoors. Not confortable at all (and bloody cold!)

The part of the documentation on How to Solder is probably THE most important section - the rest is just following instructions to put the right bit in the right place...


Silver Solder -- is this the stuff Maplin sells?

Lead-free solder will always melt at a higher temp than the old leaded solder - higher quality Lead-free does tend to contain a certain small percentage of silver. (by the way, Ã‚Â£20 a roll isn't all that expensive - my solder rolls cost Ã‚Â£32 each!)

Your soldering station certainly should be up to the job - but you *must* clean the tip correctly otherwise you'll never get the soldering working.

I do recommend the wire-wool cleaning method rather than the damp sponge - especially important for lead-free soldering where you require higher temps -> the damp sponge can reduce the tip temperature too much.

Just to recap these are the steps for successful solder - these are all in the documentation, but just to reiterate:

i) clean the tip

iii) heat the join between the PCB pad and the component leg - for only around 1 sec usually. [I tend to use a point just to the side of the tip, rather than the very tip of the iron - you get more heat transfer that way]

iv) keeping the tip in place melt A LITTLE solder into the join - it will flow nicely round the component leg. Now remove the iron tip.

v) if there are gaps around the solder join then you can re-melt it and add just a little more solder - basically, apply a small amount of solder rather than trying to add loads and loads.

Through all of this do think about how you hold the iron - as mentioned, I recommend placing the iron-holding-hand firmly on the table - almost like holding a pen. This gives a very stable position for soldering.

Also - make sure you've got decent lighting - doesn't sound like your 'desk' was the most ideal position to work! Really, a decent lamp over your work really helps to see what's going on.


Desoldering - really is quite difficult with these 'plated-through-hold' boards. A desolder pump rarely works! You are best advised to use 0.8mm desolder braid - but this is kind of tricky. In my workshop events I always do this for people myself..

For the dodgy switch - quite possibly you just need to remelt the solder and maybe add just a little more. As before - clean the tip of the iron first, melt a little fresh solder on to it and then remelt the poor joints.


Addressing the soldering technique is the most important factor in helping you to be able to build future projects. If the soldering ain't up to scratch then.....

As I say, I don't think your solder or your iron are at fault!

PS --- if you're buying anything in the future, may I recommend RAPID over Maplin - much better quality supplies and at much better prices. There's a reason why many people think Maplin is the home of the devil....
http://www.bugbrand.co.uk
http://soundcloud.com/bugbrand/
http://twitter.com/bugbrand
http://bugbrand.bandcamp.com
Top

Hope it didnt come across as a complaint about your kit - i thought the kit was excellent and really well documented.

I did read the instructions many times, and also picked up that book you recommended - by Nicolas Collins - and read the soldering guide in there, looks like I just need a lot more practise. Its probably worth picking up a few really cheap beginners kits...

I did struggle with the soldering. I googled/wiki'd solder and it suggested silver solder was high temperature stuff, hence my initial concerns. (THIS is the stuff i bought).

From what youre saying this should be ok? Is there any benefit in buying any other type of solder? (i.e. easier to work with for a n00b). I was only moaning about the cost as i thoughid bought loads completely the wrong stuff! Happy to buy some more if its easier to work with.

I only went to Maplins because there's one local and was excited to get going, rather than waiting for delivery. Wont make that mistake again.

Today I do feel it was a useful exercise, i learnt a few things; my soldering was better than the absolute nothing i could do before. I learnt you need to check check check everything 3 times. (cant believe I got the wrong capacitor in there, i thought i had checked twice, obviously 3 times). Using those helping hands, find a bit of the board without the connectors (i scratched one of the finger connectors).

From what you're saying its going to be tricky to repair this kit. Ill buy another one i think. On the positive side i have got an accidentally circuit bent instrument- it does make some funny noises, just not the ones i think its supposed to make.

It would be a nice compliment, once ive got my soldering skills up a bit.

Is it possible to 'calibrate' mine? Ie based on the mp3 demos, what switch and knob positions were they in ? Is it worth taking photos/mp3 recordings (and are you willing to look) ? Please dont feel obliged, youve been very helpful so far.

Many thanks, kind regards

I'd be happy to check it over and rectify any problems for free if you wanted to send it back to me - very easy in the UK.

Thats an incredibly generous offer. ill have a think about it.

I quite like the weird noises its making, and i havent tried it properly thru a decent set of speakers yet. Id also maybe like a go at trying to fix it, or at least having a good look to see if i can fix it. Either way id like to sample a load of the 'wrong' noises. Not even 100% sure its wrong yet, but didnt sound much like the example MP3s.

Ill probably end up jsut buying another one, and having another go. I need to get some solder braid and a sucker pump i think, for long term usage. Ill also need some wire wool. Any particular type (since im not much good at guessing?)

Ive made a recording of my WOM. Sounds much better than i originally thought.

Would you mind giving it a quick listen and seeing if you recognise it? (!) Starts with one osc, then 2 and 3, then sync,then various twiddles.

By the way, if you want to move the above posts to a new thread or delete them, to avoid clogging up this thread, please feel free, sorry, perhaps should have started a new thread.

Built it yesterday, first kit I have ever done and worked first time!
Really well written and easy to follow instructions.

SIMPLE TIP: If your eye sight is not brilliant then work under a magnifying glass.

Great work James and that's good going to get your 1st ever kit working 1st time! 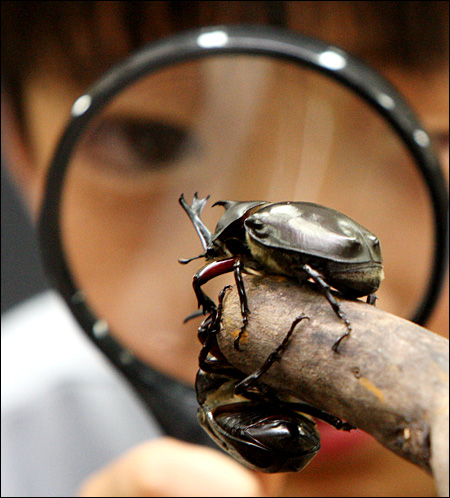 Another WOM is born!

It's capable of a surprising mix of sounds

Can you explain what's going on in the mixer section - I take it, it's not like using a TL07x OpAmp?

Also, how does the sync function work i.e. how does it 'reset' the Hex Inverter?
http://navsmodularlab.blogspot.com/
http://basicelectricityberlin.blogspot.com/
Top

Mixer -- it is actually quite similar to a standard opamp mixer but you'll notice that the 4069 only has the inverting input. The 4069, used in this linear mode, is biased around V/2 - so like connecting the non-inverting input of the opamp to V/2 (or ground if you're running a bipolar supply).
The non-linearity really comes from the 1M pots used -- any smaller and you'd upset the Oscs. Usually you'd use 100k pots for example.
There'll also likely be some fun from overdriving the whole setup (ie with the boost switched so that the gain is high - via the 1M R9) - this is quite a commonly used circuit part as the 4069s give a nice 'tubey' overdrive when driven in to the rails.

Sync -- C4 & R4 turn the squarewave of Osc1 into brief pulses (integration, I think, though my brain is farting at the moment) - the 40106 stage 'squares this up' and then the pulse is used to change the state of the other Osc caps.


Clear as mud?! Understanding is by no means necessary!

I take it you wouldn't use it as a 'clean' mixer circuit, tho?

One simple, practical question: where do the rubber feet go i.e. should one snip the legs off the switches, or are they best left for stabiltity?
http://navsmodularlab.blogspot.com/
http://basicelectricityberlin.blogspot.com/
Top

Just bought the last one on the bugbrand site.
Can't wait to get busy this holiday season.
Im planning to have a live set up consisting of bug sound devices.
Hopefully I can get a PT Delay soon (hopefully someone is selling here

) unfortunately I missed out the last two on the BST section.

themanthatwasused wrote:Just bought the last one on the bugbrand site.
Can't wait to get busy this holiday season.
Im planning to have a live set up consisting of bug sound devices.
Hopefully I can get a PT Delay soon (hopefully someone is selling here

) unfortunately I missed out the last two on the BST section.

The kit arrived a while ago to my amazement!
I was counting it to come by next week, but seven days, pleasantly surprised. Reading up the documentation and will be buying a few more things tomorrow to be able to proceed with the build more smoothly this weekend.
Thanks for this Tom!

BTW would there be another batch of WOM?
BLOG
BANDCAMP
PHOTOBLOG
Top

Nothing definite as yet (no future workshops planned as yet) but pretty likely sometime.
Cheers, Tom
http://www.bugbrand.co.uk
http://soundcloud.com/bugbrand/
http://twitter.com/bugbrand
http://bugbrand.bandcamp.com
Top

).
Great circuits mr Bugs. I am really enjoying this at the moment.
Cant wait to get my hands on a PT delay and a weevil.