Guys, will you be selling them on your own website? Shipping from Finland to Moscow seems more reasonable, than from PerfectCircuit:)
Top

elpas0 wrote:Guys, will you be selling them on your own website? Shipping from Finland to Moscow seems more reasonable, than from PerfectCircuit:)

Sorry, we're not currently selling them directly through our website. It should pop up in stores around Europe soon. We're distributed by Alex4 and we hope to have them available in your favorite store soon.

We're looking forward to opening our website when we have gathered the list of stores where our modules are available!
Top

hzzzu wrote: We're looking forward to opening our website when we have gathered the list of stores where our modules are available!

Looking forward to reading the manual when it's available too.
Top

As I mentioned in the other post, I'd love to have someone compare the sounds of this versus the Acid Rain Chainsaw - both seem to fill fairly similar niches, and both individually sound great already

Yo, video time! The cool people at Sonic State made a video with Timo at SB19. Here you can see the basic functionality of the machine:

The manual/quick start guide should be ready very soon. I'll post it here when I've put some finishing touches on it.
Top

Excellent video, thanks to yourself and Timo, so looking foward to the manual but the video covered most things.
Top

A very cool module, but it seems like a much harder sell without the expansion. What was the thinking about not just selling the module and expander together as a poly synth module?

With something like Atlantis costing $700, we're paying something like an additional 24% for midi/polyphony. Honestly, that doesn't seem outlandish at all, but I still wouldn't buy the DCO alone for $550. I'd wait until I could afford both.

Price-setting for Eurorack polyphony will be a fun task. I'm glad I'm not tasked with it!
Top

Here we go! I made some blueprints for you. I hope you get the idea, though the image size is quite small because MW. This is the current state of the firmware. So yeah. Extremely expensive on an absolute basis for 20hp of module/expansion. Possibly not outrageous in terms of functionality, which is beastly.
Top

Yeah, main module really needs to have MIDI In otherwise it's just another cloud oscillator

tisaalho wrote: The main module + expander, using only the expander CV's: Here you'd set the polyphony to 4, switch the expander to Stream -mode and plug in the four CV's on the expander. You then have four voices playing all the time,


I am a bit confused with "first four polyphonic voices". Does that mean I can have only 4 voices and lose rest of 12 voices if I feed 4 1v/oct cv into 4 inputs on the expander? Or 4 voices and each voice has 4 oscillators or voices(kind of...I can't pick right word here)?

I want to use this with Sinfonion.
Top

I'm interested in the tuning- can I get microtones out of this thing?
Yup.
Top

MATSmile wrote:Yeah, main module really needs to have MIDI In otherwise it's just another cloud oscillator

I just realized.. So.. wait. The only way to play the individual voices polyphonically is via the TRS MIDI in? Which is only on the expansion module?

gummyboy wrote: I am a bit confused with "first four polyphonic voices". Does that mean I can have only 4 voices and lose rest of 12 voices if I feed 4 1v/oct cv into 4 inputs on the expander? Or 4 voices and each voice has 4 oscillators or voices(kind of...I can't pick right word here)?

With 4 voices controlled via the 4 CV's, you indeed have 4 oscillators for each voice.
Top

I think it sounds great... and have pre-ordered at Schneiders, and waiting eagerly.

Any updates on this? (Or updates for your website while we wait?)

Super busy action time here! We received the PCBAs and we're currently assembling them with Timo. The final software is nearly finished and we're putting final touches on the test automation.

The website is waiting for some small bits of information and should be live soon! The week (or so) mentioned at the website slipped a bit but we'll try the DCO's time travel feature to fix it. Sorry 'bout the delay!

No worries. Glad to hear that you are making progress!!
Top

I notice the site is up at last, a few new details
Top

Hi all, it's been a bit quiet here as we've been busy finishing up the first batch of modules! All the units have now been put together (by hand, we've tightened quite a few nuts and attached almost as many pot hats etc over the last couple of weeks

). Now it's just a matter of getting the firmware in and making sure they work. Here's what the test and calibration rig looks like So every pair of units goes through here, the firmware is flashed in, the pitch CV's get calibrated to a high accuracy calibrated DAC (the off-white "Thingamajig" module in the picture), every mechanical and electronic thingie gets tested (we built the worst MIDI out ever in the Thingamajig to make sure the MIDI In on the Expander can read even that signal!), the sound output is evaluated by ear, and so on. We want to make sure the modules are perfect before we ship them!

Anyway, all of this high-tech time travelling test gadgetry is finally working as it should be, and it shouldn't be long now that we get the first batch out the door...
Top

Got it - and only had time for a very brief "switch on, get sound through" test.... arrrrgh

Demon Core through QPAAS through Dervish:

Can do more after the next weekend if anyone is interested.
Top

Oh maaaaannnnnn... How awesome to hear the first sound samples of our first instrument by someone other than ourselves!

How’s the manual? If something relevant is missing from there, ping me.

We’re taking a short summer break after the launch and but we’ll try to check this thread now and then.


PopGoblin wrote:Got it - and only had time for a very brief "switch on, get sound through" test.... arrrrgh

Demon Core through QPAAS through Dervish:

Can do more after the next weekend if anyone is interested.

Just picked mine up this afternoon, with the Expander. 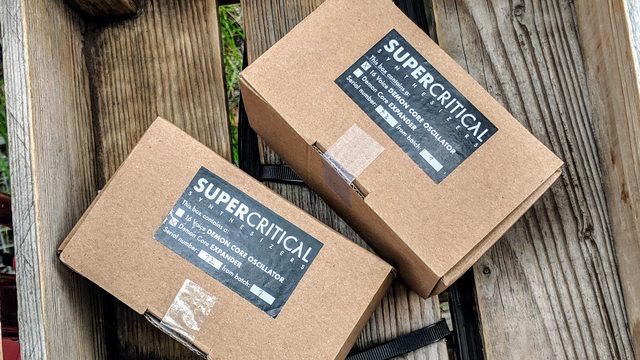 I was mainly interested in polyphony and wow, it doesn't disappoint -- I might be selling my Minilogue now (for my use, I don't mind sending chords through a single filter). The super fat stacked mono sounds are great as well.

Here's a quick recording of my first explorations (Demon Core through MI Ripples, the additional arpeggio's are my Mother 32).

Edit -- some more thoughts. I don't know what magic is performed on what is apparently just a single analog oscillator core, but (taking into account that the voices can't be processed/filtered seperately) it really does play like a polysynth. The clever midi implementation is certainly a part of that, with a "virtual" VCA and full ADSR envelope for each note. And it responds to sustain pedals, too, which is great.

I still have to experiment with the Time Sync thing, but it sounds very cool. Distributing the 16 available voices over unison, stacked octaves and polyphony is easy, the secondary functions of the knobs are all very logical, and there are some clever details like the led blinking to indicate tuning to C and the auto-adjusting TRS midi jack. It just feels like a very well-thought-out, completely finished product. I'm impressed.

https://soundcloud.com/robrechtv/demon-core-test
The Time Sync feature is interesting. It's like because you can "position" the beating/flanging in time, the sideband harmonics due to the spread/detune almost get their own attack and decay, triggered independently for each note? Which helps to set the notes apart when playing polyphonically, almost in the way that having a separate filter envelope for each note would. Al least that's my impression at the moment.
Top
Post Reply
208 posts