Show us your Bugbrand Set up

It's live except that I cheated by first recording a roughly 20 second long drone loop which comes in near the middle. Used exactly the setup you see here to make the loop. It's a monster for drones. That track was the first time out for this setup.

There is a lot of tonal variety possible. That track is a bit dark but with the filters in the PT and lots of places to adjust level/drive I'm finding many good flavors.

Chirper is always an awesome place to start something.

Cheating a little bit is fine. I love the form factor and minimalist approach. I guess that was a little outtake but you could probably do a whole set with that setup.

I was fooling around, liked the drone, put it in the looper, turned that down, fooled around for awhile bringing the loop in where it fit the mood. After, listening I chopped beginning and end.

Tomorrow I'll take it over to my friend's house for a jam session (acoustic instruments) and see how it goes. My usual approach with the looper is to put either a drone or a rhythmic thing (Chirper's sub audio rate, synced oscillator, percussive sounds) into it. Then explore. When the original loop lives out its usefulness I stick something else in there. The half speed and backwards modes are useful.

Sounds nice BananaPlug!! Really like the compact system, and I’ve got a real soft spot for the Chirper

Here’s an updated picture of my current system. Sadly had to take the PEQ out of the main case. I’m still very much using it stand alone though. Such a lovely piece of gear. When Tom release the new blue PT module, I think I’m gonna put the Stereo Comp, PEQ and the red PT together in a 11fw frame

Also had to divide up my Synth Voice into different parts of the system this time around. I tried for a long time to keep the set of modules in one 11fw part of the 5 frame system, but this time around I tried to make more of a «function»-per-frame approach (sort of)
Frame at the bottom is the tactile controller part, second row is the «rythmic»/clock/sequencing selection, third is filters and VCA’s, the the two top rows are a bit of a mess as I wasn’t thinking straight when I was rearranging. But I’ll move the Radio Music and DRM2 down to the DRM1X and then have the PT, Preamp and Dual Mixing in the top row.
EDIT: added photo of the «fixed» system. Now makes more sense. Rhythm section, and then preamp outputs, and reverb on top:-) How are you getting on with one mixer? Even in my 2 frame system I find myself wishing for a 1FW "submix" thing. Just 3 or 4 input, all banana. But i've always had a thing for mixers

Just FYI, my dual Chirper setup (May 28 post in previous page) Uses a Klavis MixWitch. It’s two two input mixers with a ton of options. One pair goes to an effect. The other combines things to the main mixer, which (modified to add a unity gain input accessible behind the panel).

That said, I got a cheap little Mackie Mix6 and for me it’s just right. Great for putting together multiple small setups, playing with other people, driving a recorder...

TYPOS - my tablet is not cooperating.

How are you getting on with one mixer? Even in my 2 frame system I find myself wishing for a 1FW "submix" thing. Just 3 or 4 input, all banana. But i've always had a thing for mixers

Well, I’ve actually considered getting another dual mixer. For now Im using my banana->jack «converter (see picture). Sending some of my sound sources directly to my mixing board. Works well so far

Also, could of course be nice with some more VCA’s also.... Had a minimal (actually fairly maximal) 2 framer for a couple of weeks and made a bunch of longform recordings I’ll edit down. Just went back to the 3x16 after building a penrose I’ve had forever and one of papz’s ‘bill’s tiny mixer’ kits behind a blank for cv mixing. Great to see all these systems - huge or small.
Thank you all

Did a big load of trades this week, here's the updated system. Really looking forward to getting stuck into the quad sine module 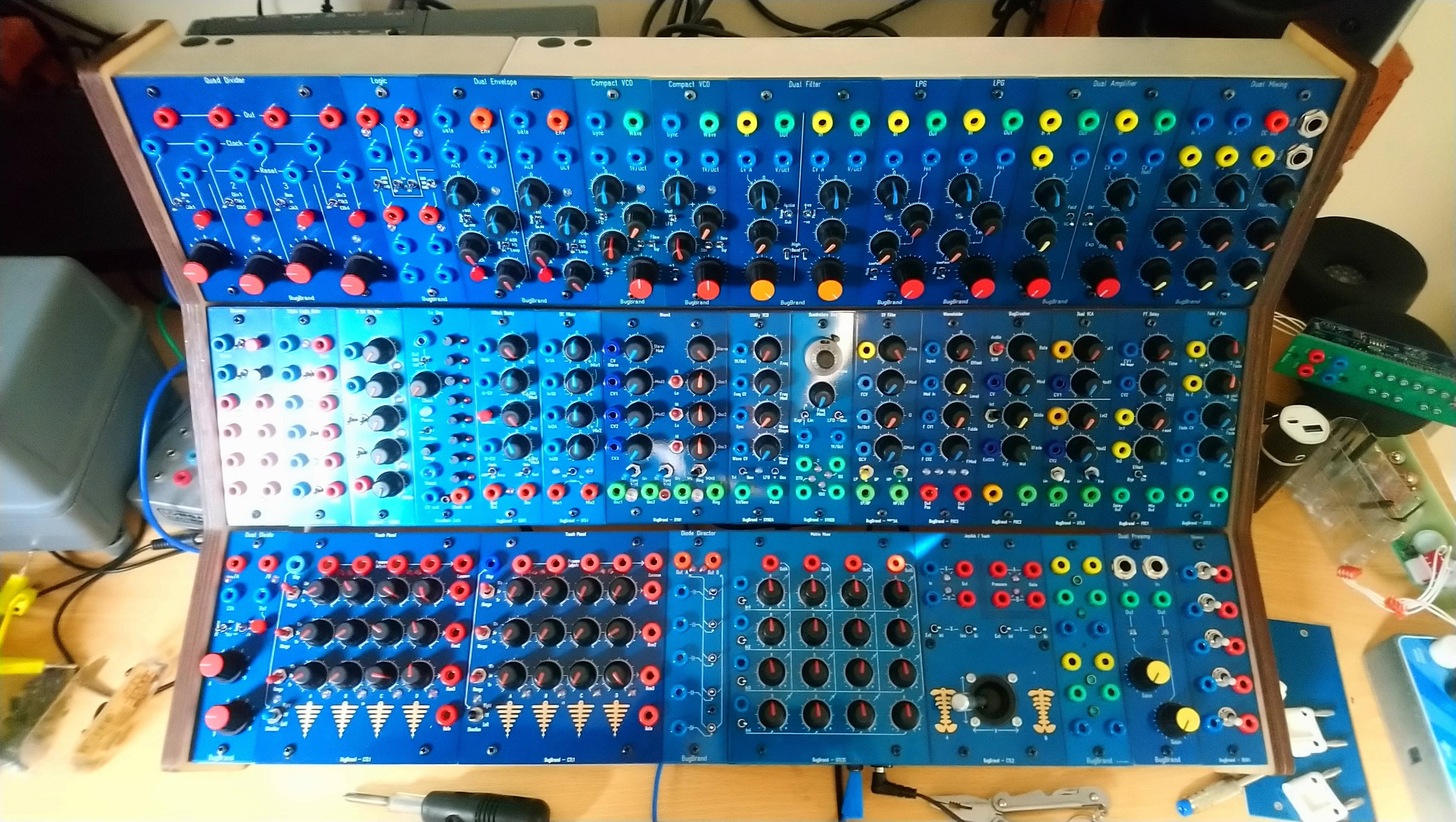 mistakenly posted in the DIY cases thread not realizing it lives in Euro land, so reposting here for people who may actually be interested! lol

put my 2frame system in a Halliburton Zero case. I've always loved the look of banana systems in Halliburton cases. Took some heavy inspiration from these beauties -> Buchla Easel cases

I didn't mount the frames into the case like Easel cases above; that's a really tidy solution but I just didn't want to get into it as I don't have the patience to make it perfect. For a little while I just sat the 2frame inside the case and called it a day. It definitely lacked some overall cohesion so I picked up some vinyl material and foam and made a crude vinyl bumper to fill out the open spaces and provide some structural stability. I'm not planning on flying with this system or anything super strenuous like that, just for portability to and from gigs or a friend's house. The bumper just slides in, with some encouragement, and everything can be removed super quickly. This is all in the "lid", btw. I like the low profile size and it leaves the larger half open to accommodate closing while patched. I can stack 2 naners and close it easily (though I usually unplug those when transporting).

The piano hinge pin was actually a breeze to remove! I almost couldn't believe it. I've had other DIY cases with piano hinges that were a nightmare. I can actually use the same pin to re-insert when closing the case, I just flipped it around so the end with the little lip faces outward, if that makes sense.

About a week ago I added the opening on the top for the power cable to pass through. There's a small window of clearance for the plug but it works. I can also feed a cable through for grounding as well. The extra space in the top is just enough to slide a format jumbler in.

Is it the most well put together case? Definitely not.
Do I love it? Absolutely Very nice choice of case there, shred!
And same goes for the modules. 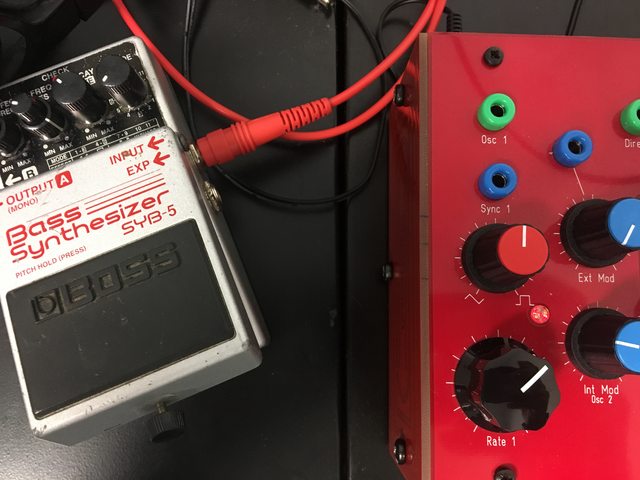 Haven't changed my portable setup very dramatically except for recent separation of frac and euro. The euro is now its own tidy rectangle, 2 36hp rows. The frac is a low low 4.5cm to its red surface. Two Chirpers and a PT Delay

After years of Eurorack I've finally seen the light and put together a BugBrand system.

Tom has been just amazing selling me individual modules as they become available as well as, recently, the 3 powered boats.

This system + a Grackler is really, REALLY fun.

Turns out bananas are the answer! Great system! Nice to see my old Stroh optogate in the rack

kingspill - nice system! what case is that, if you don't mind me asking? how are you handling the power? is there enough clearance in the back to accommodate the power plugs?

shred,
The case is Black Market Modular's unpowered roadcase and is designed for use with the TipTop Audio Happy Ending Kit (or any 84hp/rack ears combination). I bought it several years ago so I’m not sure if they still make it, but it’s great. It’s actually deep enough to hold Blacet-depth (!) modules if need be. Although I’m only using Bug and Stroh stuff in this configuration and they are much shallower. Plenty of room for power connectors. These are the newest powered boats from Tom Bugs that came with the silver aluminum rack-mountable end pieces.

I think pretty much any 19” rack case would work, even those portable "rails-only" desktop models.
work: www.daveallendesign.carbonmade.com
Top

shred,
The case is Black Market Modular's unpowered roadcase and is designed for use with the TipTop Audio Happy Ending Kit (or any 84hp/rack ears combination). I bought it several years ago so I’m not sure if they still make it, but it’s great. It’s actually deep enough to hold Blacet-depth (!) modules if need be. Although I’m only using Bug and Stroh stuff in this configuration and they are much shallower. Plenty of room for power connectors. These are the newest powered boats from Tom Bugs that came with the silver aluminum rack-mountable end pieces.

I think pretty much any 19” rack case would work, even those portable "rails-only" desktop models.

thanks! I'm familiar with those, but yeah, haven't seem them around for a while. must be pretty deep! i'm on the lookout for a similar portable case (3 rows racked) but without being super deep.